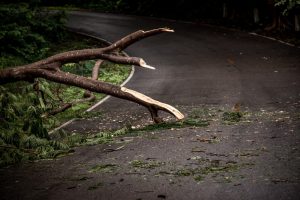 A recent accident shows just how devastating any type of road debris can be. A 23-year-old man in Memphis lost both his arms when his motorcycle struck a wheelbarrow that was in the middle of the road on Interstate 40 in Chelsea, Tennessee. The accident happened the day after Christmas, 2020.

According to WMC Action News5, the injured man had just left his job around 5 pm when the accident occurred. According to the injured rider, he was traveling about 60 mph when he switched lanes – immediately striking the wheelbarrow. In addition to the amputation of both arms, the rider broke his neck and his collar bones. Apparently, the wheelbarrow fell off the truck of a driver who subsequently pulled off to the side of the ride.

The accident victim can no longer work. He hopes prosthetic arms will be part of his future solution. The medical bills are expected to be quite high. The pain and suffering, the inability to perform numerous functions like eating and sleeping, and the victim’s quality of life will be greatly affected.

Road debris is a common danger for all drivers

A driver can lose control of his/her vehicle when he/she strikes spilled cargo, downed tree branches or limbs, material from road construction, or even a dead animal, which can cause the vehicle to roll over, collide with other vehicles, or crash into a tree or a pole. The larger the object, the more likely the driver will suffer a serious injury or even death.

Road debris is especially dangerous for motorcycle riders. Just one small impact can cause a fatality, a traumatic brain injury, spinal cord damage, broken bones, amputations, or other serious injuries. The driver is likely to fly off the motorcycle or strike other vehicles.

Types and causes of road debris

AAA states that there are three types of road-debris accidents:

If the accident is due to an object that falls from another vehicle, then the driver of that vehicle and owner of the vehicle may be liable. Drivers of commercial trucks are required to follow the Federal Motor Carrier Safety Administration (FMCSA) regulations and state and local regulations. Common truck spills include:

One of the best ways to avoid striking an object in the road that falls from a truck or other vehicle is to avoid tailgating and to leave room to shift into other lanes.

At Bailey & Greer, PLLC, our Memphis car accident lawyers understand why accidents happen and who is responsible. We often negotiate strong settlements with the insurance companies for the driver and the other defendants. We’re ready to try your case before a jury if necessary. To make an appointment with a member of our team call us at 901-475-7434 or fill out our contact form. We serve Memphis, Jackson, and West Tennessee.