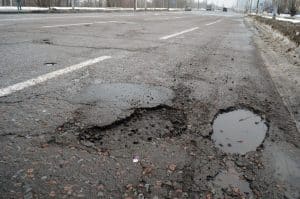 In 2020 alone, the United States saw nearly 39,000 fatal car accidents – a significant spike in year over year numbers. In fact, the National Highway Traffic Safety Administration even noted that this was a 13-year record high. Although the vast majority of accidents are not fatal, the rate in which they occur is still pretty shocking with over 5 million crashes happening each year.

The numbers appear to be rising in Tennessee, too. According to TRIP, a research nonprofit, traffic fatalities in the Volunteer State increased by 16% between 2019 and 2021, from 1,135 traffic fatalities to 1,318. Rural roads in particular are especially deadly; in 2020, TRIP reports, “the rate of traffic fatalities on Tennessee’s non-Interstate, rural roads is more than double the fatality rate on all other roads in the state – 2.64 fatalities per 100 million vehicle miles of travel vs. 1.30 – and is the sixth highest in the nation” (emphasis ours).

It is true that most car accidents tend to be caused by negligent drivers – those who were distracted, drunk, or driving too fast. However, there are cases where car accidents are caused by the roads themselves. Per TRIP:

Our neighbors to the west and south are also in dire straits; Arkansas has the worst rural roads in the country (33% in poor condition) and more than half (54%) of all Mississippi’s major roads are in poor or mediocre condition. Taken altogether, what this tells us is that the greater Memphis metro area is in need of some real structural redesigns.

Who is responsible for maintaining roads in Tennessee?

Depending on where you are, the road may be maintained by the city, county, or state*. What can make it even more confusing is that it can also be a combination of these entities. If you were injured in a car accident that you believe was caused by poor road conditions, you must first prove that the roads were actually what caused the crash and that it was preventable.

Common conditions that can potentially cause a car accident are:

*Note: some roads in Tennessee are technically private roads, meaning they are owned by individuals or businesses, not government agencies. These roads may also be in critical condition, but if you are in an accident on one, liability can be difficult to determine. Parking lots, private stretches of roadway, and property maintained by HOAs in communities can all pose challenges that may require some help form an attorney.

The good news is the federal government is putting quite a lot of money towards fixing the issues on our roads. The National Roadway Safety Strategy, developed by the US Department of Transportation, has five specific objectives. One of these objectives is safer roads. If you think that seems obvious, we understand; after all, shouldn’t the DOT have been making roads safer the whole time?

But this is the first time a strategy like this has ever been implemented. Instead of creating federal roads that are designed to get people from Point A to Point B quickly, the DOT is looking at how people drive in specific areas (urban, suburban, rural) and making recommendations on road design and layout based on those needs. It’s also focusing on “redundancy” measures, meaning that its recommendations include design choices with multiple fail safes. For example, instead of creating a road that has, say, rumble strips on the side (to alert drivers if they move out of the lane), the road might also have wider edge lines so they’re ore visible. For rural roads specifically, the design might include something called SafetyEdge℠, too.

If you or someone you know was injured in a car accident caused by roads that were in poor condition, our Memphis attorneys want to help. Bailey & Greer, PLLC is here to collect evidence, build a case, and protect your right to compensation when you have suffered an injury in a car accident. Call us or submit our contact form to schedule a free consultation in Memphis or Jackson. Serving all of West Tennessee.