Electronic Scooters Are a Menace to Pedestrians and Vehicles

Home / Electronic Scooters Are a Menace to Pedestrians and Vehicles

Electronic Scooters Are a Menace to Pedestrians and Vehicles 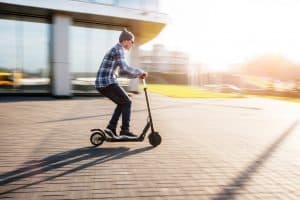 Electric scooters, also called e-scooters or dockless scooters, are a hot new trend. Their appeal is that they’re a fun way to travel through urban areas. Many riders purchase or rent their e-scooters from Lime, Skip, Bird, and other companies for a low price and for minimal operating costs. Often riders snake between pedestrians on sidewalks and other cars on roadways instead of calmly riding in a straight line. Worse, many ride through red lights and stop signs disobeying the traffic laws.

Unfortunately, these scooters pose deadly and dangerous risk to the riders and to anyone in the path of the scooter. According to Forbes, deaths from e-scooters have already occurred in Los Angeles, London, and other locations.

Nashville Mayor David Briley banned the use of e-scooters in late June 2019. The devices are not permitted on sidewalks and roads. The ban is in response to the death of a 26-year-old rider who died after turning into the roadway from the sidewalk and being killed when his e-scooter and an S.U.V. collided. The Mayor gave seven e-scooter companies a chance to develop safety regulations. He issued the ban because he felt the regulation responses didn’t properly protect public safety from the possibility of death and injuries. Other Tennessee cities like Memphis still permit the use of these e-scooters, however now, even Nashville (according to Slashgear) may allow some e-scooters to return.

Types of e-scooter accidents and injuries

There was a study conducted by the Journal of the American Medical Association on two emergency room departments in Los Angeles that examined nearly 250 crashes between September 1, 2017 and August 31, 2018. They found that the most common types of e-scooter crashes were falls, striking objects, and colliding with moving vehicles. The injuries included:

One in three crash victims required an ambulance service to transport them to the nearest hospital. Only 4.4 % of the riders in involved in e-scooter crashes were wearing a helmet – even though helmets are recommended.

Currently, there are about 65,000 electronic scooters on American streets and sidewalks.

The New York Times recently wrote an opinion about the escalating danger of e-scooters in Nashville – before the newly enacted ban. They added that there have been e-scooter deaths in Oklahoma, Paris, and Sweden. The story revealed that the e-scooters only cost a dollar to rent and about 15 cents a minute to ride. E-scooters are touted because they don’t pollute or add to urban heat.

Unfortunately, the cons outweigh the pros:

Currently, e-scooters can be rented in more than in 100 US and European cities. The cities are working to catch up with the laws needed to regulate the e-scooters and the riders.

E-scooter riders who injure others should be held accountable for their actions. The families of riders who die due to a faulty e-scooter should file a claim against the manufacturers. At Bailey & Greer, PLLC, we have the experience and resources to help you get justice when accidents such as e-scooter crashes happen. For help now, call us at 901-475-7434 or fill out our contact form to schedule an appointment in our office in Memphis or in Jackson. We represent injury victims and families throughout Western Tennessee.