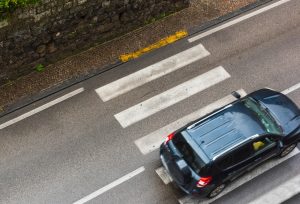 Sport Utility Vehicles (SUVs) are extremely popular. Many owners like them because they think driving an SUV provides more protection than a standard passenger car. The height and weight of SUVs generally make SUVs more able to endure the forces of a collision than a vehicle. The height of an SUV provides better sightlines for many drivers.

There are dangers with driving an SUV though. SUVs are generally more prone to rollovers than cars. SUVs can make drivers feel overconfident – thus causing drivers to take more chances. SUVs tend to come with more distracting features such as entertainment systems. They also present a far bigger danger to other drivers, as well as cyclists and pedestrians.

A recent study by the Insurance Institute for Highway Safety indicates that SUVs are more likely to kill pedestrians than other types of cars. While the IIHS reports that the average number of people killed in motor vehicles accidents has dropped from 50,000 in 1980 to 36,560 in 2018, the number of pedestrian deaths is on the rise.

A prior IIHS study confirmed that accidents involving pedestrians have become more frequent. While most pedestrian accidents involve cars, deadly single-vehicle accidents where an SUV strikes a pedestrian increased by 81% from 2009 to 2016 – more than for any other vehicle type.

Is one study really enough to show SUVs are dangerous?

While the Michigan crash study is limited, the patterns of injuries do compare with earlier national studies. A 2010 research review of crashes reported that the risk of a fatal pedestrian injury increases by 50% when the vehicle is an SUV or light truck.  The National Highway Traffic Safety Administration, using 2015 data, found that “pedestrians are two to three times ‘more likely to suffer a fatality when struck by an SUV or pickup than when struck by a passenger car.’” Traffic fatality data out of New York found that, in 2015, about 25% of cyclists “killed on the road were killed by drivers of large trucks, buses, SUVs or vans.”

Why are SUVs so dangerous to pedestrians?

The IIHS study shows that an SUV is more likely to “throw pedestrians forward” and almost twice as likely to cause the pedestrian to suffer severe hip injuries and thigh injuries. The pedestrian typically collides with the SUV’s bumper, headlights, or grille, because the “high point of the front profile” of a new SUV is much higher than that of a typical car.

While SUV manufacturers have made adjustments to reduce the risk of death and injuries to car occupants (such as aligning bumpers and other parts of the SUV that absorb force to the height of cars), they have failed to redesign their vehicles to protect pedestrians. The changes that might help car occupants are not likely to help pedestrians.

IIHS is currently looking into this issue by examining what kind of design changes could make SUVs safer.

In Europe, manufacturers have “introduced pedestrian airbags” and other inventions which have been shown to be effective in reducing pedestrian injuries. Using Europe as a model is problematic, though, because there simply isn’t the demand for SUVs in Europe as there is in America.

Can pedestrians file claims against SUVs and other vehicle manufacturers?

If a driver of an SUV or any vehicle strikes a pedestrian, it’s almost a certainty that the driver was negligent. For most victims or families of victims, the best way to hold a negligent driver accountable is by filing a claim against that driver’s insurance company.

Families of a pedestrian who is killed can file a wrongful death lawsuit against the driver, owner, and any other responsible parties such as a manufacturer.

At Bailey & Greer, PLLC, our car accident and product liability lawyers have been fighting for pedestrians, families, and any other injury victims for almost 35 years. We demand the responsible parties pay all your damages which include your physical pain, emotional suffering, medical expenses, lost income, and other applicable damages. To discuss your case with a seasoned trial lawyer at our Memphis and Jackson offices, call us at 901-475-7434 or fill out our contact form to schedule an appointment.