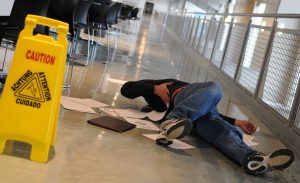 Acts of nature are something most of us understand to be unavoidable. We are at the mercy of hurricanes, tornadoes, and inclement weather conditions in general. That includes the natural accumulation of ice and snow on the ground in areas we walk through, which can cause us to become hurt.

While we don’t have the ability to prevent snow and ice from forming, we do have the ability to remove it to make areas safer. This idea is what led to the creation of the natural accumulation rule, which gives rise to an action to premises liability for a winter time slip and fall injury.

What is the natural accumulation rule?

When snow and ice begin to stick to the ground and build up over a period of time, it’s known as natural accumulation. It creates a hazardous condition to areas such as parking lots, steps, walkways, and sidewalks. The property owner owes a duty to those expected or invited on the premises to the extent that reasonable steps need to be taken to make these areas safe from slipping and falling.

The natural accumulation rule goes a step further and also requires that the property owner remove the  snow and ice in a reasonable amount of time after it has collected on the ground. Each state assigns different factors to define what is reasonable.

In Tennessee, the criteria for reasonableness in the removal of snow and ice includes:

Does natural accumulation automatically mean you have a case?

The short answer to this question is no, it doesn’t. The type of premises and the control the owner has over the property are going to directly relate to whether a duty was owed in the first place. Without owing a duty to the injured party, no case will be able to move forward.

A duty will likely be owed if the portion of the property affected is a common area that people are expected to access. One exception to this rule is if you are renting only a portion of the property and the landlord retains control over the remainder of the building or lot. In this scenario, the natural accumulation rule would be a potential claim to argue if you slip on an ice patch and break a leg.

Inside your business or home – even the backyard of a rental property – is not likely a place where there will be liability on the landlord for failure to remove snow and ice. If you rent a home with a patio that’s piled with snow and you open the door to let your dog out and subsequently lose your footing and fall, you may be hard pressed to find a judge who will agree the landlord should have shoveled that snow.

The experienced Memphis slip and fall injury lawyers at Bailey & Greer, PLLC, understand the challenges you face while recovering from a serious injury after taking a fall on slippery ice or snow. To schedule your free, no-obligation consultation in our Memphis or Jackson office call 901-475-7434, or we invite you to reach out to us through the firm’s contact page to tell us your story.