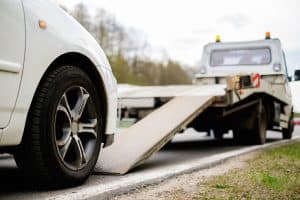 Tow-truck drivers perform a valuable service for stranded motorists, and they do it in all weather conditions, in all types of traffic, and on all kinds of roadways. They have one of the most dangerous jobs out there.

The risks to tow-truck drivers are severe. Approximately 60 tow-truck drivers die each year. The International Towing Museum in Chattanooga erected a Wall of the Fallen in 2006, “To honor those who have made the ultimate sacrifice, to generate public awareness of the dangers involved in the towing and recovery industry and to permanently record and commemorate those involved in fatalities in the towing and recovery industry.” It also maintains a Survivor Fund, for the families of drivers who have been killed while working.

Tow-truck drivers are often called to help someone whose tire is flat, someone who has run out of gas, or a driver who was involved in an accident. One tow-truck driver, Dennis Brewer, told Michigan Live that near misses are common. For example, he talked about how a tractor-trailer nearly missed hitting his flatbed which was on the far side of the road. Brewer had to hang on to the flatbed for dear life as the tractor-trailer whizzed by.

In Tennessee, we do have a “move over” law, and the list of vehicles covered by that law has expanded. The list includes:

Violation of the move over law is usually a misdemeanor, but if someone is hurt or killed, the driver could face felony charges. Yet every day, drivers zip past tow trucks and other emergency services vehicles without changing lanes, putting those workers at risk.

At Bailey & Greer, PLLC, our lawyers treat clients like people, not case numbers. We will fight to ensure that the negligent party will be held accountable. To speak with respected Memphis truck accident lawyers, please phone us at 901-680-9777 or fill out our contact form. We represent clients in Memphis, Jackson, West Tennessee, and the nearby areas.