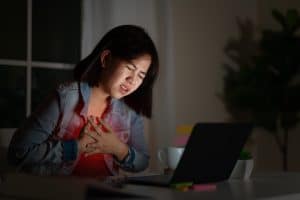 A recent study which was presented to the European Society of Cardiology Acute Cardiovascular Care Congress revealed that chest pain in women is more frequently misdiagnosed than chest pain in men. Heart attacks and heart disorders have generally been thought of as male diseases. Women who present symptoms of heart disorders are often:

The ACS study is important, because it can help women get the proper diagnoses, and therefore proper treatment, they need when it comes to heart conditions. Gemma Martinez-Nadal, MD, urgent care physician at Hospital Clinic of Barcelona, Spain, was quoted in the journal Helio as saying “Heart attack has traditionally been considered a male disease and has been understudied, underdiagnosed and undertreated in women, who may attribute symptoms to stress or anxiety.”

How was the ACS study conducted?

The study analyzed nearly 42,000 patients who presented with chest pain, of which 42% of the patients were females with an average age of 65 years. The other 58% were males whose average age was 59 years. The study compared the following factors for each sex:

The researchers for the study classified patients as:

STEMI (ST-segment elevation myocardial infarction). STEMI is the shorthand heart doctors use to say someone has suffered a classic type of heart attack. According to Very Well Health:

Non-STEMI, another form of heart attack

What were the results of the study?

The researchers discovered that:

Dr. Martinez-Nadal said that the findings of the study indicate that there is a gender gap in how chest pain is first evaluated – which likely means that heart attacks in women are underestimated. The doctor stated that “The low suspicion of heart attack occurs in both women themselves and in physicians, leading to higher risks of late diagnosis and misdiagnosis.”

In TV and film, we often see people grabbing their chests the moment they experience heart attacks. According to Go Red for Women, however, there are four other signs to look out for:

Furthermore, “women are somewhat more likely than men to experience some of the other common symptoms, particularly shortness of breath, nausea/vomiting and back or jaw pain.”

The Cleveland Clinic seconds many of these signs, as well as the onset of “new or dramatic” fatigue.

Is failure to diagnose a heart attack an act of medical malpractice?

It could be. In order to determine if you have a medical malpractice case based on a misdiagnosis or a delayed diagnosis, there are several factors to consider:

In cases such as a failure to timely diagnose a heart attack, any delay can be fatal. Patients who survive the misdiagnosis may need to have surgical procedures performed such as bypass surgery, implanting stents, and other medical procedures. Patients may also suffer functional losses such as the ability to work, exercise, dress themselves, and the ability to perform daily tasks.

What are some of the common types of misdiagnosis of cardiovascular patients?

In addition to a failure to diagnose a heart attack, doctors may be liable for medical malpractice if they misdiagnose any number of cardiovascular diseases, infections, or failures, including:

In some cases, a misdiagnosis can cause a patient to be treated for a medical disorder she/he doesn’t have. This unnecessary treatment can create problems for the patient she/he never would have had – but for the incorrect diagnosis.

In most cases, a misdiagnosis means that necessary treatment is delayed. The delay can cause death. Delay can mean that a treatable condition is now untreatable or that the treatment isn’t as effective as it could have been.

At Bailey & Greer, PLLC, our Memphis medical malpractice lawyers work with respected cardiologists and other heart care providers including rehabilitative care providers. We aggressively fight to show that the doctor owed you a duty of care, that the duty of care was breached due to the misdiagnosis, and that the breach of the duty of care caused you additional harm. We demand compensation for your medical bills, pain and suffering, and lost income. In death cases, we file wrongful death cases on behalf of the families who tragically lost a loved relative due to medical error. To schedule your free, no-obligation consultation in our Memphis or Jackson office call 901-475-7434, or fill out our contact form to schedule an appointment.